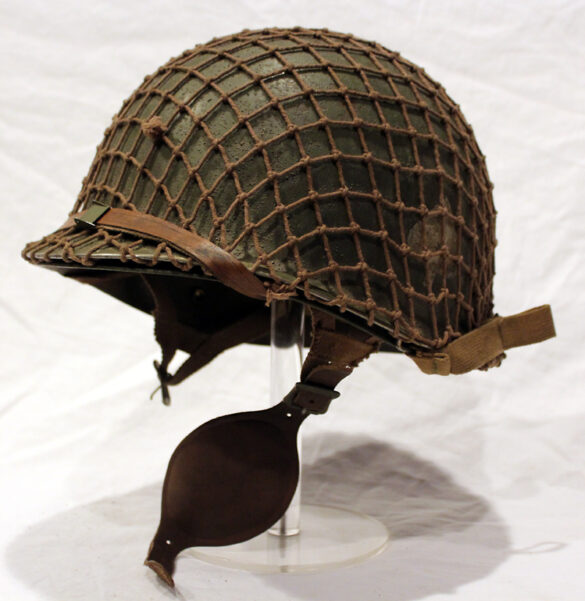 This M1 helmet has a lot number that indicates early 1942 production. It was fully stripped of all post-war paint, then recorked and repainted the correct shade of WWII olive drab. The 506th PIR spades were hand rendered on both the helmet and liner. The stencil was duplicated from an original example that had been ground dug from a former position held by the 506th during Bastogne.

The restoration here was based on helmets worn by the 506th Parachute Infantry Regiment after Normandy. This configuration can be seen at Market Garden, the Ardennes and Bastogne. After McCord Radiator ceased making M2 helmets, paratrooper units that needed a helmet had to make due with regular fixed bale shells. These helmets in most cases were fit with regular Infantry chinstraps as was done here. The shell was then fit with a regular jump liner, either a Inland or Westinghouse versions. In this case a second pattern Westinghouse jump liner was used. The liner is an original WWII production Westinghouse liner, that has been rebuilt  into a jump liner. All parts are excellent reproductions, and distressed to match the helmet. The blackened brass A washers are original WWII production, and have been set using blacked steel semi-tubular rivets as was done by Westinghouse on this model jump originally.

The helmet has been carefully distressed to look and feel like an original battle worn example. Today original examples are almost impossible to find, and sell for thousands. Here is a great example for your shelf at a fraction of the price of the real deal, but still looks and feel the part.

Just arrived. A rare ventless m18. One of around 2