A Helmet with a Dark History

The SS helmet has earned it’s place in history as one of the symbols of the Holocaust. There can be little argument that there is validity to this. The helmet saw use by camp guards, the dreaded Einsatzgruppen and many other members of the SS who helped perpetrate the events that became known as the Holocaust. What may come as a surprise is there is another helmet that is equally deserving of this dark reputation but is almost unknown; the Ordnungspolizei transitional helmet.

In the early morning hours of July 13th, 1942 men from the 2nd Company of the 101t Reserve Police Battalion left Biłgoraj, a small village in German occupied Poland near Warsaw for a special assignment in the Winiarczykowa Góra forest, outside of Józefów. Most of the men from the 101st had been civil Policemen in Germany and in a few cases Luxembourg prior to the war. Due to their Police experience they had been called up to preform police functions in the newly German occupied territories. Many were middle aged and deemed unfit for frontline duty, but still fit enough to preform Police duties. Before leaving Biłgoraj each man was issued a satchel full of ammunition and copious amounts of alcohol was given to any who wanted it. It appears that the men were well aware of what waited for them in the dark Polish forest, 12 policemen requested permission to remain behind and permission was granted. If there were any doubts about what the assignment would entail  things were made clear upon arrival. Around 1500 Jews from the Józefów Ghetto many of them women and children had been herded into the Winiarczykowa Góra forest. It would be the responsibility of the men of the 101st to murder them. Little time was wasted in preforming the slaughter. Men, women and children were lined up and shot at point blank range by inebriated German Policemen. Some of whom gripped a vodka bottle in one hand, their Luger in the other taking glutinous swallows from the bottle between delivering kill shots to the backs of their Jewish victims heads.  Some of the policemen after a few hours of murder begged to be relived from this masochistic duty. Permission was grated to all who asked and they were allowed to return to the village. Most however stayed and finished what they had been ordered to do. After 17 hours the Policemen had completed their murderous task. The men trudged back to Biłgoraj their lime green trimmed bluish-gray uniforms literally soaked in blood, bone fragments and brain matter. Their glossy apple green helmets and highly polished black police boots more fitting for the parade ground or directing traffic, now marred with spatters of blood and gore. Tragic scenes like this occurred with brutal frequency all over Poland, Ukraine, Belarus, Russian and the Baltic between 1941 and the collapse of the Eastern front.

While those with some degree of familiarity with WWII history would no doubt recognize these brutal acts of the Holocaust there maybe some confusion as to who the perpetrators of this slaughter were. There is good reason for this.  Due in large part of Hollywood film. The images of young, blond, trim SS soldiers donning dark coal scuttle style helmets emblazed with SS runes and swastikas, vested in tunics with a grinning skull on one collar tab and SS runes on the other, have cemented themselves in the popular culture’s imagination when events of the Holocaust are brought to mind. While this vision isn’t far off the mark, the SS and their auxiliary organizations perpetrated a staggering number of crimes during the Holocaust it isn’t the whole picture either. Unfortunately the role that the Ordnungspolizei as wells as their Trawnikis auxiliaries played in the Holocaust have for the most part been forgotten, yet they perpetrated huge numbers of mass murder in the occupied territories. The latest research indicates that police battalion operating in Poland, the Baltic, and the U.S.S.R. were responsible for the murder of at least 1 million souls.

Who were the Ordnungspolizei?

The Ordnungspolizei were the uniformed Police of Nazi Germany. Often referred to as Orpo or Grüne Polizei, a nod to the color of their uniforms. The Orpo conducted virtually all of the Third-Reich’s police duties from civil policing, Fire fighting to the coast guard and civil defense. The Ordnungspolizei were organized as part of the SS and were under the direct control of Reichsführer-SS Heinrich Himmler. Starting 1939 with the invasion of Poland a number of Police battalions were organized to be deployed in the newly occupied territories. Initially these battalions were used to maintain law and order, and were deployed in anti-partisan actives. Soon however the duties of these Police battalions were expanded to include patrolling the perimeter of Jewish Ghettos, transporting Jews from Ghettos to concentration camps, and to assist with the liquidation of Jewish ghettos and villages. These battalions would work both in conjunction and independently of the Einsatzgruppen.

As Police units were not intended to serves in a front line capacity it should come as no surprise that much of their equipment was obsolete. The helmets they were issued were no different. Photos taken between 1939 and 1943 show that re-worked Great War era helmets were very common. Between the years of 1935 and 1938 the German government sold a huge number of their new M35 helmets to the Chinese, Spanish and Finnish governments. This action meant that by the time the German armed forces participated in the first clashes of WWII there were not enough helmets to go around. For units who had not already received new M35s helmets prior to the start of the war older WWI produced M16, M17 Austrian and M18 helmets were supplied. These are often called transitional helmets by collectors. Most of these helmets were upgraded with new paint (often applied over the WWI era finish), a modern M31 liner and new chinstrap. With all new M35s helmets being supplied to the growing German army, Police units received the older WWI helmets ,thus freeing up the modern helmets for front line troops who needed them. A number of photos show in some units a mix of M35s and older WWI helmet helmets this is probably due to the unit having taken delivery of M35s helmets prior to the beginning of the war. After the war began and Police units were expanded the newer members would have received the older helmets.

A close inspection of original photos seem to indicate a overwhelming abundance of M17 Austrian helmets being worn by the Ordnungspolizei. The Austrian helmet is immediately recognizable due to the visible rivets that secures the chinstrap bails to both sides of the helmet. After the Austrian Anschluss. There may in fact be a sinister reason for the over abundance of Austrian helmets seen in Police units. In the immediate months after the fall of France and as the German army expanded in preparation for the invasion of the Soviet Union, Himmler expanded the Orpo as well. The combat trained Waffen-SS and Wehrmacht troops were going to in high demand at the front, therefore the dirty work of ethnic cleansing would be placed in the hand of the Police. Clearly as the Orpo was expanded there would have been a need to supply the men with a steel helmet. Combat troops would have had priority for M35s and the newer M40s, therefor the Orpo would have received older helmets. After the Anschluss the Germans seized thousands of Austrian army and Gendarmerie helmets. There helmets were mostly WWI M17s which the Austrians had continued to re-work and reuse thought-out the 1920s and 1930s. With the expansion an order for helmets would have been placed for the Ordnungspolizei. It is likely that the seized store of Austrian helmets would have been made available.

Original M17 Ordnungspolizei show a number of characteristics. One is the paint finish. The helmets appear to have been re-worked in a hurry. A new coat of grey-green paint was applied over the existing pre-war Austrian paint by means of a brush, on the outside of the shell, and on the inside of the skirt and bill. Runs, and sloppy brush strokes are often observed on originals. In March of 1940 an order was issued to change the paint that was used on helmets. A darker shade of matte field gray was authorized which was mixed with aluminum oxide powder to create an anti-reflective finish. While most of the combat helmets were over painted with this new paint, it seems that this was rarely done with Police helmets, including the older WWI transitional helmets. Original Police transitional helmets have the early smooth semi-gloss paint. Since most Police units were not on the front line, thus negating the need for anti-reflective finish. They may have simply seen no reason to comply with the order.

The Liner and Chinstrap

The primitive three-pad WWI style were re-used, instead of being replaced with the more comfortable M31 liner. The older Austrian pre-war chinstraps were also retained. This was without a doubt an economic measure to conserve the newer components for combat troops.

There were two type of Police decals used during the war. The early version seen above is known as an un-bordered or 1st pattern Police decal. A later version with a silver border was also used on Orpo helmets but only on later model helmets. These earlier Austrian helmets exclusively used the un-bordered variant. It should be noted that an order was issued in March of 1940 which stated that the party shield on SS helmets, and the national colors decal on Heer, Luftwaffe and Kreigsmairne helmets were no longer to be applied at the factory level. This order did not apply to Police helmets, and therefore Police helmets would continue to have both decals til the end of the war.

The End of the Transitional Helmet

With much of the grim work of the final solution completed and the war turning against the German forces, Police units were withdrawn from the East. Many returned to Germany and were put back to work as civil police. Other were redeployed as combat troops where they would see significant action in some of the final battles of WWII.

These old transitional helmets were put into storage as their owner received newer helmets for combat. At the end of the war many of these Police helmets were discovered in Police supply depots by allied troops and taken home as war souvenirs. In later years they would end up in the collectors market where today they can fetch a premium.

Popular culture images die hard. Much of the general publics understanding of the Holocaust stems from what they have watched in films and on TV. The thousands of movies and TV shows that have been produced about the Holocaust have rarely depicted the Ordnungspolizei, despite their dreadful blood soaked record. This maybe because of poor research on the part of the produces of these shows. It may also be because the public may simple not understand why Nazi policemen in odd looking helmets are depicted instead of the SS. Whatever the reason it is unlikely that the Ordnungspolizei will ever been seen on the same level as the SS. Yet accuracy is and should be important to any production which wishes to recreate historical events, so hopefully at some point this will change.  While the Ordnungspolizei transitional helmet may not be immediately recognizable as one of the symbols of the Holocaust it still has a place as a silent witness to one of the worst crimes of the 20th century. For that reason alone it is worth knowing the history of this helmet. 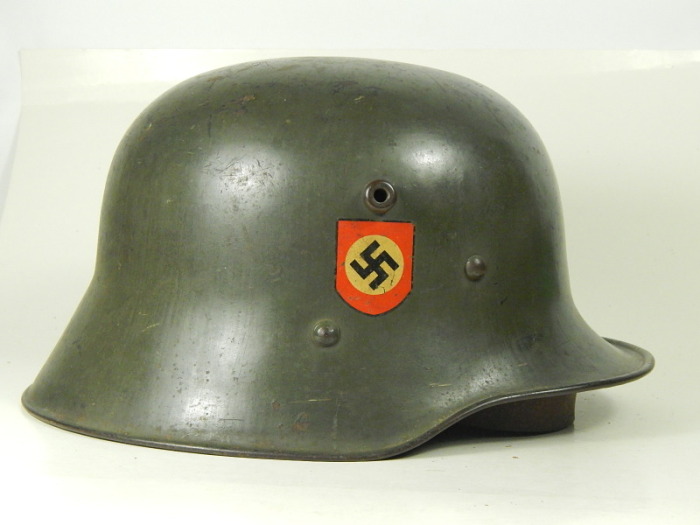