It is day two of the Baltic trip. Today we drove south away from the Baltic and into Poland. Our trip across the boarder was uneventful and almost boring. The border check point is no longer manned due to the Schengen Agreement.

The first town we came to in Poland was Suwałki. Suwałki once had a large Jewish community. It was virtually wiped out by the Nazis in WWII. Today if you visit the Suwałki cemetery you can see the pieces of Jewish gravestones set into a cement wall. These were taken from Jewish graves that were broken up by the Nazis. Another interesting fact I learned about Suwałki was at least six of the Polish Officers murdered by the Soviets at Katyn were from Suwałki. There is a small monument to them, unfortunately I was unable to locate it. It seems everywhere you turn in Poland there is some memory of WWII. After leaving Suwałki we continued south into what was once East Prussia. This particular part of Poland was part of German East Prussia prior to 1945. What I found interesting was as we traveled into this part of Poland you could clearly see the German influence. Many of the houses, barns, and churches all date to the East Prussian era. It is clearly evident in the architecture. My Sister even commented that she thought it looked like we had entered Germany not Poland. We stopped briefly at an antique shop in the town of Gizyko. The shop was filled with 1920s, 30s, and 1940 art deco furniture. I wondered what these things would say if they could talk. I imagine much of it had been left by their German owners as they fled the Soviet advance in 1945. Silence witnesses to devastation of East Prussia. We didn’t linger too long in Gizyko our destination was a town called. Kętrzyn. During WWII Kętrzyn was known as Rastenburg. This was where Adolph Hitler had his Eastern Headquarters, known as the Wolf’s Lair. Hitler’s code name was Wolf, some of his inner circle even called him Mr. Wolf. It was here that decisions were made about the use of prisoners in the German armaments industry and about the construction of new death camps. Adolf Hitler, Hermann Goring, Heinrich Himmler, Martin Bormann, Wilhelm Keitel, Joseph Goebbels, Dr. Fritz Todt, Albert Speer and a number of other all lived and worked here at different times. To get to the Wolf lair is a bit of a challenge. You must travel deep into the woods, following a winding pot hole filled road. This was the original road and was used by anyone traveling to the Wolf’s layer including Hitler and Colonel Claus Von Stauffenberg.

Traveling down this road we came across an old decaying guard towers, some cement bunkers once used by the Luftwaffe and a number of other structures of which were to badly destroyed to tell what they were. We pulled over to explore of one the bunkers that once served the Luftwaffe.

The destruction of the bunkers and other buildings gives you the impression that the place may have been bombed by the allies. In fact nothing could be further from the truth. As the Red army closed in on East Prussia Hitler gave orders for the Wolf’s Lair to be destroyed to keep it from being used by the enemy.

After this short stop we continued on to explore a little more. We soon came to a small parking lot where we could leave the car and explore further. When we got out of our car an older Polish gentlemen came up to us with a folder full of photos of the area in WWII. He proceeded to tell us in Polish, what I can only guess was a spiel about the area. All I understood was the words Interesting, Hitler, and Mussolini.I stopped him and said the angielsku, which means English in Polish. He stopped and made a gesture to wait. He left and a few moment later returned with a women who spoke English and asked if we would like a guide. We agreed and worked out a price. Our guide grew up in the area and as a little girl in used to pick wild strawberries with her father in and around the former Wolf’s Lair. She told us she had been guiding people at the Wolf’s lair for over 20 year. One of the first things she told us was that she had the distinction of giving the tour to Hitler’s person body guard, Rochus Misch  when he returned to visit in 2007. She showed us his photo from WWII and then a photo of her and him during his visit. She said he told her that he had personally heard the shot when Hitler killed himself, while he was standing outside the door during the last days in Berlin in WWII.

He also said that being in the Wolf’s Lair was the best assignment he had during the war. The only issue was the mosquitoes. I have to say I agree. I have lived in Hawaii and Brazil. I have visited Central America and Mexico. I have never in my life seen mosquitos the size of the ones that are everywhere in and around the Wolf’s lair. So if you ever visit make sure you take your bug repellent.

The first place our guide took us was to the exact spot where Colonel Claus Von Stauffenberg left his briefcase containing the bomb which he hoped would have killed Hitler. She asked if we saw the movie Valkyrie, we said that we had. She then responded, “I have seen it 40 times. Its about 60% true, the rest is, as you say in America is Hollywood”.

She the proceded to tell us the story of Operation Valkyrie, and what went wrong with the plan. She also showed us where Von Stauffenberg  prepared to bomb and then where he went after leaving the briefcase.

After seeing all of this it was impossible for me not to imagine what it must have looked like. I pictured Von Stauffenberg quickly walking down this road. What must have been going though his mind? Did he have any idea of how it would end?

After leaving this area of the Lair our guide took us to a number of other buildings that served different functions at the Lair.

We spent the rest of the afternoon exploring the many ruined bunkers and building of the Lair. 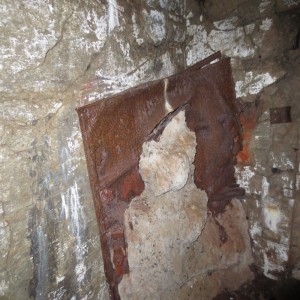 As our guide prepared to leave she told us that not long ago she guided a production team from the American TV show Ghost Hunters International. They wanted to see if the place was haunted. Apparently after spending the night they do not believe it is. Well I don’t know anything about real ghosts, but the Wolf’s Lair is haunted. Perhaps not by shape shifting apparitions but by its own history. As I walked around these ruined buildings it was impossible for me not to see and feel the people that spend time here. It really did not take too much imagination, when standing in the exact spot where these historical events played out. There may not be any “real” ghosts at this place, but it is haunted, by the ghost of the past